Jackie Ralph completed a Bachelor of Fine Art in 1988 at Victoria College in Melbourne Australia. She then travelled extensively and lived for a short time in both London and New York whilst maintaining a studio practice.   In 1998 Ralph moved to Japan. There, she developed an interest in Sumo wrestling forms, an interest that was to inform her paintings for the next seven years.  In 2004 she returned to school, completing a Graduate Diploma of Visual Art in 2004 followed by a Master of Visual Art in 2005 at the Victorian College of the Arts in Melbourne Australia.   She has exhibited in group and solo shows. 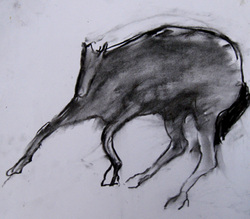